1222
As we celebrate Pride Month, we amplify voices that our unique Minnesota Women's Press magazine has shared since 1985.

I am old enough to remember being taught that the pronoun “he” correctly referred to the entire human race. I am young enough to be parenting kids who use “they” all the time. My son and daughter know both the transitioned and the transitioning; gender fluidity is neither scary nor taboo.

Gender Justice was a founding member of the broad coalition behind the groundbreaking Women’s Economic Security Act, a wide-ranging bill with provisions on reducing the pay gap, supporting women-owned businesses, expanding unpaid parental leave, and much more. … In 1993, Minnesota became the first state to prohibit discrimination on gender identity as well as sexual orientation in its Human Rights Act.

“Out in Rural Minnesota,” by Kendall Anderson, October 2012

Fitting in means being “safe,” Schuman said. “We feel like we have the rainbow banner on our shoulders and that we have to be safe and palatable to everybody and if we aren’t, we are doing a major disservice to the LGBT community.”

She dislikes what she sees as “‘the invisibility of being bisexual.’ If I am with a woman, people think I am a lesbian. If I am with a man, they assume I am straight.” … “I think it is good to get people out of their boxes. Sometime I might say to my partner, ‘I am going to the queer women’s potluck.’ But I can’t go if I am not invited.”

During the extensive testing and numerous interviews that preceded Alex Nelson’s hiring to the police department, he had been open about the fact that he was a pre-operative transgender man. 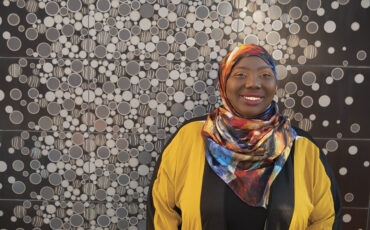 excerpted from the archives of Minnesota Women’s Press