Voices from the shadows

Mona Smith is one of those people who seems to juggle an amazing amount while keeping her humor intact and not dropping any of the balls she keeps in the air. Working 12-hour days to get ready for an upcoming gallery opening, assisted by husband, Jerry, and a team of dedicated helpers, she fit in a last-minute cell-phone interview on the way to a conversation with teachers at the Minnesota Humanities Commission. Squeezing in a spontaneously scheduled photo session, she took time to greet friends and neighbors in the Ancient Traders Market complex on East Franklin Avenue in Minneapolis’ Phillips neighborhood, where her “City Indians” installation opens on Nov. 10. Disconnected? On the surface, she seems anything but. Yet if an artist finds passion and inspiration in the conscious and unconscious elements of one’s own life, it is not surprising that Smith would find herself led to this particular work.

“City Indians” is a modern way of weaving stories of relocation and of creating a tapestry of voices and images that otherwise remain in the shadows. It tells the tales of particularly the Dakota, who have remained in or returned from forced exile to their homeland. It includes the trunk of a Crown Victoria-a major engineering feat for the small gallery space-used by police officers in 1993 to transport two Indians to a Minneapolis hospital.

The goal of the exhibit, Smith said is to “make it possible for people to hear what it is like for Indian people to be in their homeland, yet be disconnected.”

Smith herself grew up disconnected from her Sisseton Wahpeton Dakota roots. Her mother, now in her 80s, was orphaned at the age of 8, and raised by nuns at a Catholic boarding school near Red Wing. Other than the occasional presence of a storytelling uncle, she was largely distanced from her heritage.

Her mother met Smith’s father, a non-Indian and former chemist for Red Wing Shoes, when he was building a fiberglass boat in the living room of his shack near the Mississippi River. Young Mona was their only child, and grew up in Red Wing with a love-and fear-of the creative arts. Self-conscious when a camera is focused on her, Smith revels in listening and drawing out the stories of others. “It gives me an excuse to learn things I need to learn,” she said. “With a camera I have a reason to ask questions that I’ve otherwise been scared to ask.”

One of Smith’s earlier works included the story of young Indian children running away from boarding school. Her mother, seeing the video for the first time, wistfully mentioned remembering kids running away. “Through my work,” Smith said, “I get these little glimpses of my mother’s life. She doesn’t talk about her childhood much. It was a pretty grim time for her.”

After her childhood in Red Wing, Smith attended Mankato State University. “I dropped in and out,” Smith laughed. “It took me seven years to graduate.” Along the way, she worked as a modeling stylist and a bartender. She did graduate work in women’s studies at Boston’s Goddard Cambridge Graduate Program in Social Change, but it was while teaching at Mankato State in 1983 that Smith found her direction, in the form of the newfangled “porta-pak” an early predecessor of the portable videocamera-and in the work of writer Studs Terkel.

“I fell in love,” she said. “I had this vision of being able to use technology to talk to Indian women in particular, and to enable others to listen to their stories.” She turned her love into work, and her documentaries led to a stipend from the Smithsonian’s National Museum of the American Indian, which enabled her to create the multimedia room “Cloudy Waters: Dakota Reflections on the Water,” which was featured at the Minnesota History Center in 2004 and 2005.

“That changed my life,” Smith said, adding with her breezy sense of humor, “I tease them that I used to be able to make a living doing videos, but their job ruined me.” Now she feeds her passion for ancient storytelling-complete with cameras and cables and RGB/Videolink and adaptors and hoisted car trunks-“and I’m deeply in debt,” she laughed.

Although Smith didn’t grow up with it, the spirit of ancient storytelling has greatly impacted how she tells her own “video poems.” Rather than educating with facts designed to control what is learned, she intends to induce a trance-like state with her installation that enables visitors to absorb, observe and experience messages in very individualized ways.

“Educating by going solely through the mind is not enough to give a sense of who we are, why we make the decisions we do, what values we hold,” she said. She hopes to bring her brand of immersive media to classrooms, history museums, and environmental centers.

Smith learns something new from every story she gathers. They stand alone, but they also represent links to the universal spirit. “Mitakuye Owasin means that all things are connected,” she said “The people who have gone before, the land, all people, the animals, plants, the thoughts, the ideas. Everything affects everything else.”

And perhaps most rewarding, Smith’s work enables connection. “My mother influences everything I do and don’t do,” she said “As I’ve been going home to Indian country to record stories, she’s found great joy in that. It reconnects her.”

And, obviously, it reconnects Smith herself-the artist, the Dakota, the self-conscious but strong-minded storyteller. 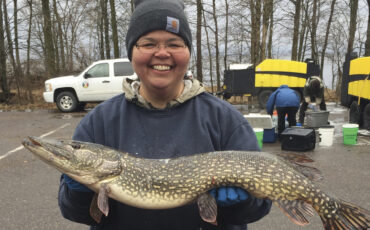