by Kassidy Tarala
1234
I think this was his way to tell me that in my life, there were people who would try to control my stomach, my Black body. I have been taught that we, as Black people, reflect and realize what destiny is and how people in power can never take that away.

Since the pandemic began, our definition of community has shifted. With lockdowns and social distancing, and reevaluation and changes to our priorities and beliefs, we are no longer the same people we were before March 2020. Many people have turned to organizations, groups, and churches to hold on to a sense of community — sometimes not leaving home.

New City Church is one community that has made a deeper shift into its digital capabilities. The church is based in Minneapolis and welcomes members across the world. The church got its name from Revelation 21, which describes a heaven where God lives in a “new city” where everyone is welcomed, there is no violence, and the earth is renewed.

Kai became more involved with New City after she was admitted in 2020 into the Incarnation Fund, which financially supports people of color in accessing spiritual direction, trauma therapy, and nature-based therapy, especially with practitioners of color.

Kai is an Indigenous African woman with Liberian American roots. They are a healer, artist, anthropologist, and storyteller, as well as a full-time teacher. Whether in the classroom or in church, they say that racial justice and liberation are at the forefront of lessons. “As an educator and artist, I try to make sure Black and brown persons are able to take control back into their lives, and that they become the success they see in the world,” Kai says.

“My hope is for Black and brown people to reclaim their stories of hope, prosperity, joy, love, inspiration. For them to feel like they have agency in their life. We all have agency — to wake up, do what we need to do. Not just because we need to fit a mold or a script, but because our body says: I need you to do this today, for yourself.”

New City Church’s staff is predominantly queer, which Kai says helps to ensure that LGBTQ+ justice is at every level of the organization.

Liberation, Kai says, is a central part of New City Church’s philosophy. “New City does not see antiracism, or liberation in general, as separate from our spiritual journey. Rather, we see God’s work in antiracism, Jesus’ calling in queer liberation, and the Spirit’s inspiration in building social movements that transform our society to look more like the abundant, life giving world that God intended it to be,” they say.

Kai, whose father was a Liberian immigrant searching for the “American Dream,” says she was always taught that “whoever controls your stomach controls your destiny.”

“I never understood what this meant. He always talked in riddles. As much as I loved the riddles, there was truth in it,” Kai says. “My dad went through a lot to be in this country. While he lived here for 35 years, he tried to experience the American Dream. However, his race, his status as an African man, really inhibited him. My dad was unable to control his stomach. As a man who studied agriculture for a living, got his PhD, he never got the plot of land he always dreamed of having in America.

“I think this was his way to tell me that in my life, there were people who would try to control my stomach, my Black body. I have been taught that we, as Black people, reflect and realize what destiny is and how people in power can never take that away,” Kai says. “In my work, I try my best for people, especially Black and brown people, to feel liberated in hearing their stories within education and history, so they can be in control of their own stomachs. … Spaces that are not violent to them.”

“Church is ‘Have you eaten something today?’ Church is ‘Oh, you are having some shitty things happening right now. How can we guide you?’,” Kai says. “At New City, we make sure that whatever situation you are in — living alone, monogamous, polyamorous, whatever — you have a community that shows up for you. We are not meant to live this life alone. Who controls your stomach should be your community.”

“New City Church is a United Methodist Church, and our pastors are United Methodist clergy,” Kai mentions. “With that said, many — perhaps as much as half — of the community does not actively identify as Christian, whether that means they identify with another religion, no religion, or are not sure.” 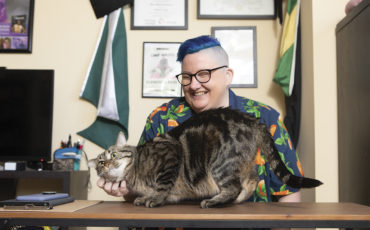 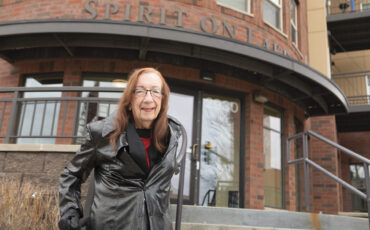