Where are the women coaches? Media coverage?

“Girls are watching. When they are playing sports and they see who is coaching and who is not, who is in the media and who is not, [what they see and hear] communicates worth and value,” says Nicole LaVoi of the University of Minnesota Tucker Center for Research on Women & Girls in Sport. She does not mince words. “We are communicating the wrong message.”

Sports matter in our society. Sports are a powerful social institution. If we see more women in positions of power in sports, “it communicates that women are and can be confident leaders in a context that matters, that they are competitive and are visible,” LaVoi says.

According to the Women’s Sports Foundation, high school female athletes are less likely to be involved in an unintended pregnancy, more likely to get better grades in school and more likely to graduate than girls who do not play sports. Girls and women who play sports have higher levels of confidence and self-esteem and lower levels of depression.

Many think that Title IX – the 1972 landmark legislation that bars gender discrimination in education, including sports in educational settings – is part of history. It is and it isn’t.

Because of Title IX, female participation in high school sports has increased by more than 900 percent in 45 years, according to the Women’s Sports Foundation. Today, the number of high school girls participating in sports has risen tenfold, and women in college sports is up six times since 1972, yet men and boys still participate at higher rates than women and girls.

Mary Jo Kane at the Tucker Center indicates that in one to two generations we went from girls hoping there would be a team to hoping they made the team. The paradox is that in those same generations, women went from dominating coaching positions for women and girls’ teams to being a minority – two very different trends.

In media coverage, the gap grows even wider between men’s and women’s sports. In data from 1989 to 2014, researchers at Purdue found that women athletes were covered less in media over time. The study noted a mixed blessing in this coverage: In 1989, 5 percent of coverage was given to women athletes, but “it often was commonly either in the role of comical object of the sports anchor’s joke or as sexual object.”

Today women and girls receive 2-4 percent of media coverage, says LaVoi. “Who you see tells you who is important.”

LaVoi observes that Title IX may always be under attack because it provides women equal access and opportunity to positions of power and strength. “We fought [opposition] back in the 1990s, and I expect that some battles that will be waged are yet to come,” she says.

LaVoi challenges us to do something.

“At the schools or sports clubs or youth teams, progressive women have to insist that women be represented in positions of power, get up and get involved.”

LaVoi suggests when you see that female athletes are not getting media coverage, tweet or post about it. That tweet in the moment, when a sports event is happening, can be the most effective. Let your print and broadcast outlets know that you notice and you expect to see equitable coverage.

In our workplaces, community organizations and more, LaVoi says, “women need to support each other, advocate for each other. We have to be role models. You have to be visible, be active, be heard.”

Last spring, I was aboard a student research vessel with fellow college students to conduct research projects that ranged from phytoplankton studies to plastics and biological surveys. 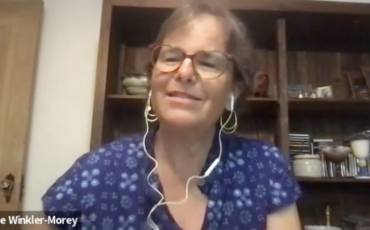 This represents an excerpt of a Changemakers Alliance conversation we hosted with Anne Winkler-Morey, author of “Allegiance to Winds and

Gusts were so strong we expended energy just to keep the bikes upright. Dust swirled, filling our lungs.