‘We are all moving’: Sisters Need A Place (SNAP) helps Muslim women on their journeys

“We need a place everywhere – in the office, at the [corporate or nonprofit] board table, in our homes,” Sakinah Mujahid says. “Someplace where we can talk amongst each other.”

For women who are immigrants, and/or members of a religious minority, finding that place may be challenging. SNAP – Sisters Need A Place – is there to help.

Its beginnings were modest: In 1999, a few Muslim women began meeting in their homes to discuss shared concerns, including issues involving housing, employment and family strife. In 2004, the group organized as a 501(c)(3) nonprofit to better address their shared concerns. While SNAP focuses on Muslim women, its programs and services are available to all women.

About two years ago, through a generous donation, SNAP purchased a north Minneapolis duplex. The first floor houses its offices, a public meeting space and a shelter, with transitional housing upstairs.

“We purchased the property at a reasonable amount and did the rehab with a local business,” Mujahid says. “To keep costs down, we bought furniture from Ikea; we even put the bunk beds together.”

The attic became the “Phenomenal Woman Clothing Closet” – an especially useful resource for job-hunting women or new converts to Islam. Plans include an on-site community garden.

The shelter has two bedrooms; rent is $75 per month. Women are allowed to stay for up to 90 days, but the scarcity of affordable apartments sometimes extends that timeframe.

The transitional housing program offers four bedrooms (at $300 to $400 per month, including utilities) where women can stay for up to 24 months. Most women arrive via word of mouth; some are referred by a religious leader or one of SNAP’s many partner agencies. Many are in transition after a marriage ends, or after they relocate from another state.

Although domestic abuse is an important issue for SNAP, it is not a battered women’s shelter. However, SNAP works closely with domestic violence shelters by, for example, “giving ‘Islam 101’ presentations” to help shelters better serve Muslim women, Mujahid says. Conversely, through workshops, SNAP also educates the Muslim community about domestic violence.

The framework of Islam shapes SNAP’s work in ways both philosophical and practical.

The building’s layout includes ample space for group prayer. No boys over age 7 reside there so that Muslim women may uncover (that is, remove their hijab). Pork products, alcohol or smoking are not allowed in the building.

In a 2013 SNAP newsletter, Mujahid wrote, “We are all moving to get where we want to be.” Given everything she’s done and the many hats she wears, Mujahid moves faster than most.

She came to SNAP as a volunteer in 2006, helping women apply for jobs or driving them to appointments. In three years, she went from volunteer to secretary to client services professional to executive director.

Her position is part-time, as are two other staff positions. Mujahid also works full time with homeless families in Scott and Carver counties for Beacon Interfaith Housing Collaborative. She serves on the boards of CAIR-MN (Minnesota chapter of the Council on American-Islamic Relations) and the Minnesota Humanities Center. She’s getting a master’s degree in marriage and family therapy from St. Mary’s University. And she has five kids, ages 6 to 20.

Which prompts the question: Does she ever sleep?

“I go to bed at 9:30 and wake up at 6. Time management!” Mujahid says, laughing. Her time management skills were enhanced by 13 years in the U.S. Army, which she joined right out of high school.

Mujahid, 40, and a third-generation Muslim, was born in Phoenix. She came to Minnesota with her parents at age 9.

“We always traveled a lot,” she says. “The Army allowed me to keep exploring, jump from airplanes and see the great United States.” Mujahid served stateside, getting her bachelor’s degree through the G.I. Bill.

Mujahid is a collaborator, a skill also likely honed by her military experience. Partner agencies with which SNAP has referral relationships – which work both ways – include Bridging, Lutheran Social Service of Minnesota Financial Counseling, Open Access Connections and Families Moving Forward. SNAP also has built relationships with area landlords and Masjid An-Nur – a nearby mosque – is an important partner whose services include a food shelf and meal program.

SNAP holds an annual forum in March (Women’s History Month), featuring community speakers and vendors. This year’s speakers included Anse Tamara Gray, founder of Rabata – a website dedicated to building spiritual ties among women. Every other year, SNAP sponsors a weekend retreat with a featured speaker and group discussions. Both events are open to Muslim and non-Muslim women.

“The more partnerships we build, the more we can all help each other,” Mujahid says. 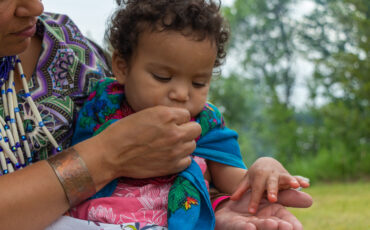 By doing this work, Harvest Nation assumes a receiving role within the large movement known as Rematriation, the returning of seeds to their mother land to be reunited with the earth and its people.