by Anne Hamre
159
"I'd rather run long and slow than short and fast. It's my therapy."

Mary Croft shows up for the long run

Women marathoners have come a long way-literally and figuratively. It began with Melpomene.

In 1896, Melpomene applied to enter the Olympic Marathon in Greece. Organizers said no, but when the race started, she ran alongside the course. Barred from entering the stadium at the finish, Melpomene ran her final lap around its perimeter.

Today, a woman running the 26.2 miles from east Athens to the Panathenaic Stadium is far less conspicuous. Among those blending in with the crowd in October 2010 was Minnesotan Mary Croft: She joined thousands of women (and thousands of men) to mark the 2,500-year anniversary of the climactic Greek-Persian battle that gave the event its name.

Croft is running toward a personal goal of completing a marathon on every continent. By doing so, she would join an exclusive club, the Seven Continents Club, that lists over 300 members. Of these, nearly 100 are women.

Croft has five down, two to go. Besides North America (including Canada and all 50 U.S. states), she’s run at least one marathon in Africa, Europe, Australia and Antarctica.

One memorable experience was Summer Solstice in 2006, when she ran the White Nights marathon in St. Petersburg, Russia-right after her husband’s open-heart surgery. “I had to get him into a rehab facility so I could leave,” recalled Croft (a retired nurse), chuckling at the memory. Two years later, he accompanied her to Australia, where she checked another continent off her list.

Thirty-year commitment
The road began in Duluth, where in 1982, Croft went to see a friend run Grandma’s Marathon. “It motivated me, and I came home and told my husband about it,” she recalled. “He heard on the radio that a Twin Cities marathon was starting and said, why don’t you sign up?” She’d only been running about a year by then, but decided to go for it.

Last month, Croft ran the Twin Cities Marathon for the 30th time-a feat that places her in another exclusive club. Only four women have run every year since 1982 (35 men can make that claim).

“It’s considered ‘the most beautiful urban marathon in the country,’ and I think I would agree with that,” Croft said. “This year there were lots of spectators around Lake Harriet and along Summit Avenue, and it’s hard to find a more scenic five-mile stretch [along Summit] anywhere.”

That’s high praise, considering how much of the world Croft has seen-not just since she began running marathons, but all her life. Her parents were missionaries; she grew up in Papua New Guinea and attended high school in Australia.

After settling in Minnesota and starting a career as a nurse, Croft was introduced to running by two colleagues. She found it helped her transition between sometimes-stressful workdays-Croft worked at the Stillwater prison for 15 years-to home life with her husband and son. Running allowed her to unwind and leave the tensions of the day somewhere by the side of the road.

“I’d rather run long and slow than short and fast,” Croft said. “It’s my therapy.”

It’s not only prison staff who need to blow off steam. For years, Croft held a marathon for prisoners. “There were usually about 20 to 25 inmates and 10 to15 outside runners who joined us,” she said. “The marathon was 110 laps around the prison yard.”

Blessed
Croft calls herself “pretty blessed” to have had no stress fractures (which are common for runners) and only one injury in 30 years of marathons: a pulled muscle at the Twin Cities Marathon a few years ago.

She finished that race, however-and in under five hours, despite having to walk the last several miles. Indeed, Croft has finished every marathon she’s started.

Why does she do it? Croft loves a challenge-both physical and logistical.

“Part of this may come from being the oldest of seven and the ‘trailblazer’ for … my siblings,” she said, adding that her parents “modeled challenges by being missionaries in a part of the country where no missionaries had been yet.”

Completing 50 states without spending a fortune on travel was “quite the challenge,” noted Croft. She’d map out one-week-apart races in one region, maximizing her time and travel budget.

Not content with limiting herself to 26.2 miles, Croft also challenged herself with 50-mile and 100-mile races. She didn’t finish the initial ones, but she’s completed several since those first attempts.

Not finishing a race is “a devastating experience-you analyze it, beat yourself up for a while, ask what you could have done differently,” Croft said.

“But then you realize some things are beyond your control-and there’s always another race,” she added with a chuckle.

And rest assured, Mary Croft will show up for it.

Periods are expensive. If you’ve had one, you understand that period products are not optional to use. As someone who

Ready to get your kids out of the house this summer? Here are the trainings, camps, and internship options we 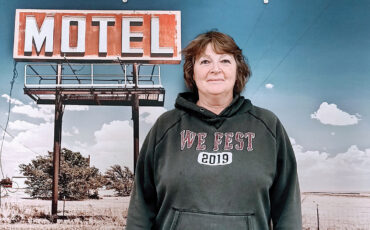