by Camilla Breen
873
“This project has a bigger national image than it does in the state,” Hurston says. “I think what draws people outside of Minnesota to this is the fact that they are aware of the stories of Philando Castile and George Floyd, the banking drought."

Fed up with policing injustice after the murder of Philando Castile, which is linked to economic injustice in North Minneapolis — a banking desert riddled with payday lenders that can charge 400 percent on a small loan — the Association for Black Economic Power (ABEP) began the years-long process of launching a credit union in 2016. Credit unions are member-owned nonprofit financial cooperations for banking.

After early management missteps, Debra Hurston was tapped by the new ABEP board to start from scratch. Regulators require her to re-establish community pledges and donations, which had previously included 2,000 surveys from community members indicating their desire for a credit union. She currently has $3.7 million in corporate deposits and $1 million in community pledges, which she would like to more than double.

Although her staffing now consists of one part-time assistant, she has the support of community, state, and federal experts, starting with a “rock star” from the national African American Credit Union Coalition. “This project has a bigger national image than it does in the state,” Hurston says. “I think what draws people outside of Minnesota to this is the fact that they are aware of the stories of Philando Castile and George Floyd, the banking drought. When I am contacted by organizations outside the state, they want to know what they can do to help.”

Hurston has a background in working with associations, and says, “This project has given me this amazing amount of respect for people who work in the credit union field. When they say cooperative, that is not a word — that is what they live. Part of it, too, is that the credit unions realize North Minneapolis has been left to be victims for so long. This is an opportunity to course correct.”

Hurston grew up with a single mom on the south side of Chicago, which was “an amazingly challenging place to live as a kid. My mother eventually got us out of that. I have been very fortunate to have gotten a great education.”

After George Floyd was murdered, Hurston says, “I felt completely incapable of helping. When this opportunity became available, I felt like it was a way for me to use my skills and my voice to help. It makes me feel like I am doing something extremely meaningful with my life. Not just my career, with my life.”

Debra Hurston invites anyone to ask her questions, or invite her to speak, about the status and needs of the credit union. Learnaboutvillage.org

A documentary that features Minnesota entrepreneurs 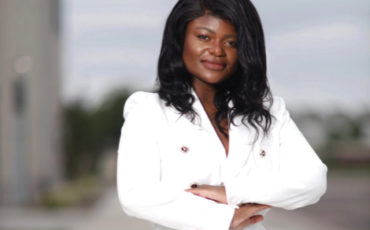