Prevention is the key to avoiding heart disease

Making it to 50 is her goal, said Sandra Revill Tremulis. Fifty is her marker. It’s the age her father died of a heart attack. Living with the reality of chronic heart disease, Tremulis, 44, a Minnetrista, Minn., resident, counts her blessings every day.

Tremulis’ near heart attack happened five years ago. While on her regular run in her Redwood City, Calif., neighborhood, she noticed she felt a mild tingling in her chest. She also became overwhelmingly tired. Her symptoms went undiagnosed and she boarded a plane to Washington, D.C. On the return trip, she noticed that her feet had swollen. To counteract this, she took aspirin, which turned out to be a life-saving measure. Shortly thereafter, a test showed that one of her heart’s main arteries was 95 percent blocked. “My doctor couldn’t believe I was still alive,” Tremulis said. She had a medical procedure to have a stent (a tubular support device) implanted in her left anterior descending artery. This allowed oxygenated blood to reach the left side of her heart and the rest of her body.

Coincidentally, as a successful marketing professional in the medical device industry, Tremulis spent her days in a catheterization lab, surrounded by instruments that physicians use in heart-disease-related procedures. Even though she was athletic and physically fit, genetics were working against her: Her father, grandmother, aunt, cousin and several uncles had died or suffer with heart disease. She hadn’t taken her family history into account before her near heart attack.

Her brush with death inspired a dramatic change in lifestyle. Wasting no time, Tremulis retired early, married and moved from California to Minnesota with her husband, Steve. When the couple decided they wanted a child, her physician told her that chances of her getting pregnant and carrying a baby to term were slim. Against the odds, their daughter Alessandra was born on Christmas day in 2006. Remarkably, her arteries are in slightly better condition now than they were prior to her pregnancy. “It turned out fine for us-we have a beautiful daughter,” she said.

Becoming a volunteer spokesperson for the American Heart Association (AHA) helped pull Tremulis out of the depression that immediately followed her heart episode. “It gave me purpose and meaning,” she said, adding that she hopes her work helps prevent others from going through the same thing. However, the challenge is motivating people to act.

“Nobody, like me, thinks it’s going to happen to them. I was the picture of health. I thought I had everything right.” While she’s a passionate advocate for heart health, Tremulis also testifies to the personal transformation that the near-death experience has brought about.

Among other life lessons, she has learned never to put anything off. That means immediately saying what’s on her mind, especially when it comes to her loved ones. “Now I slow down and appreciate the people I am with and tell them. I tell my Mum that I love her all the time and have tried to leave nothing unsaid with her, thanking her for everything she has done for me,” she said. “I always tell my husband and Ali that I love them whenever I leave them and last thing at night.” Furthermore, she has adopted a more positive outlook, staying focused on what’s important. “When something stressful happens I put it into perspective by remembering that my family and I have our health, I have my family, and happiness. What else could I need?” (A sense of humor helps too, she’s quick to point out.)

Physically, she tries to stay in shape: working out, maintaining a low-fat diet and keeping abreast of health care advances. She tries to live life to its fullest. “I am always aware that something could go wrong at anytime,” she said. “But, you cannot live your life like that forever. I take calculated risks.”

Among those risks is running. The first time Tremulis braved a run by herself after the near heart attack, she brought along aspirin, a cell phone and her golden retriever Homer, for extra security. “I did feel scared when I ran and I still do, but that doesn’t stop me because I need to exercise. … The only time I had the tingling in my chest was when I ran so it is actually a barometer for me,” she said. “In a strange way it builds my confidence back up when I run.”

Although progress was slow at first, she’s able to run almost as much as she once did. While she may never be as lithe as she once was, “I just love getting out there and moving. Every race I do I choke up when I finish because I realize just how lucky I am to still be able to do this. Why do I run? Because I can. I have used [running] to raise awareness for women’s heart disease. I don’t think that fear will ever go away … because there is no cure for heart disease. I will always be battling this chronic illness,” Tremulis continued.

“Preventative care to stop the disease from getting any worse is what I am banking on for my longevity.”

Heart disease is the leading killer of women in the U.S., affecting one-third of women nationwide, according to Courtney Jordan, M.D., a cardiology fellow at the University of Minnesota’s Department of Cardiology and School of Public Health.

According to the American Heart Association (AHA), more women succumb to cardiovascular disease than the five next most common causes of death combined. Additionally, it disproportionately affects women of color, for reasons that are still unknown, Jordan pointed out.

Heart disease encompasses a number of factors, but it primarily is a narrowing of a blood vessel that leads to heart attacks, according to Jordan. While men’s deaths from heart disease are dipping, the rate among women has been rising since 1984, according to the AHA. “Women’s symptoms are atypical,” Jordan said. “We’re not seeing the same decline in women as men. Women with heart disease have worse outcomes than men when they have heart attacks.”

Men typically experience intense chest pain in conjunction with a heart attack. Women’s symptoms are subtler. They include nausea, shortness of breath, back or jaw pain, and sweating. Symptoms in women may arise a decade later than they do in men, delaying diagnosis and subsequently, their treatment.

In Jordan’s view, heart disease is often related to the stress women carry from being in the workforce and tending to their families. “There’s a stress component. They tend to hold the family together. They tend to call doctors

the least and let something go by the wayside,” she said. “It’s up to women to call the doctor when something feels out of whack. That’s probably real,” Jordan said. “If there’s something odd, it needs to be evaluated.”

People should be screened for heart disease 10 years before they reach the age that a family member was when he or she had a heart attack. Yearly checkups are also key. While it might seem excessive, prevention is better than the alternative, Jordan said. “We advertise that you should know your blood pressure and cholesterol,” she said. “Ask if it’s elevated. If someone is in the ‘high risk’ category, they have to be on the alert.” Heart disease symptoms may occur suddenly and if they are something a woman hasn’t experienced before, action is needed. “That’s why the individual has to be the one to determine if anything seems out of the ordinary,” Jordan said.

CardioSmart
www.cardiosmart.org
A patient-friendly website with useful links and resources on heart disease. 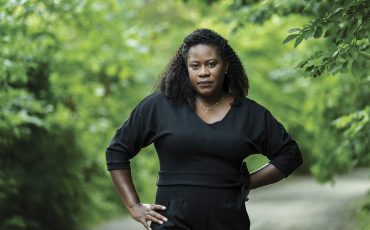 Having the data to objectively show what has been hidden for so long gives power back to the communities that are harmed by the system.