by Mikki Morrissette
531
“We have never been represented by somebody like me, with this voice, with the communities that I am bringing in."

In November, a majority of Minnesotans voted in transformational and inclusive politics. Discussions held with many now-elected and long-time Minnesota politicians and advocates explored the changing face of leadership. One of the common themes we heard: women tend to get things done by developing relationships. Approaching politics as a transactional process — “you give me this and I will give you that” — is a patriarchal approach.

HaoPay Lee, a member of the Hmong-led MaivPAC, put it this way: “When it is transactional, people who want to succeed think that dividing and conquering is how you do it. That is a colonized way of leading. [But] we know that when more of us are working on the same issue together, we look at it from different angles, and we look at it in a more wholesome way.”

Clare Oumou Verbeten, one of three Black women elected to the Minnesota Senate for the first time, won District 66 near Saint Paul with 78 percent of the vote. As she told us: “If we are going to have a true democracy, we need people of all walks of life to be in office. That includes different racial identities, different gender identities, different sexual orientations. Those things that make up who we are as people really do impact the way we experience the world.”

Alicia Kozlowski is the first two-spirit legislator, getting 71 percent of the vote in District 8B. In Duluth, “voters want to fundamentally change the face of power,” they said. “We have never been represented by somebody like me, with this voice, with the communities that I am bringing in.

Leigh Finke won her House seat with 81 percent of the vote in District 66A. She is the first openly trans Minnesota legislator. She entered the race, as a mom with a background in renewable energy policy, because of “the increasingly hateful and violent anti-trans movement that is taking place across the country, including here in Minnesota.” In her celebration speech, she was elated about the success of LGBTQ+ candidates. “Queer political power is starting to take hold in the state of Minnesota.”

Minnesota Women’s Press columnist Ellie Krug won her school board seat in traditionally conservative Carver County. People in the district who asked her to run were concerned that she would be the target of negativity as a trans woman. She agreed to run because she is “hopelessly idealistic” and believes “we all have an obligation to make the world a better place.”

Voting for Democracy and Rights

At the DFL election night celebration, U.S. Senator Amy Klobuchar began by saying, “You are going to find out that for a lot of Americans, democracy was truly on the ballot.”

Klobuchar told the story of her walk with a handful of other women to deliver the Presidential election ballot totals from the Senate to the House on the morning of January 6, 2021. “It was simply a ceremony. By the end of that night, at four in the morning the next day, when we took that walk [to finish the disrupted ceremony] we were walking on broken glass. Columns on all sides of us were covered with racist vulgarities everywhere we looked.”

The right of women to make decisions about their bodies, finances, and families was indirectly on the ballot. Large numbers of young women streamed into the Saint Paul hotel that served as DFL headquarters on election night. Labor union members were gathered in one meeting space to watch results. In another, Planned Parenthood representatives were marking a map to indicate where pro-choice candidates won.

At the DFL event, outgoing Planned Parenthood president Sarah Stoesz, who is stepping aside after 20 years, said: “In our great state, no woman is forced into childbirth and no woman dies because she cannot get the basic abortion [health care she needs]. Because you all have worked so hard this year, we are going to keep it that way in Minnesota.”

Newly elected Representative María Isa Pérez-Hedges directed some of her victory speech to her three-year-old daughter, who was hugging her legs. “You are my determination. We are heading to the castle, as you call the Capitol. It is time to polish up those golden horses and those walls with the true history and reflection of what education needs to be taught, in truth to power for you and every child in the state to grow, be as strong and healthy as possible, and have the opportunities you want. I am here to fight with every breath to protect your rights by any means necessary.”

Ten of the 13 candidates we talked with this fall won their races.

Next up for statewide conversations: learning from each other about how issues of education, economics, and more are dividing people, especially in regions of Greater Minnesota. 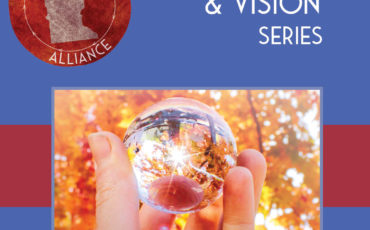