Chronicles of a Radical Hag

The following is excerpted from Lorna Landvik’s 2019 novel “Chronicles of a Radical Hag (With Recipes).” Throughout the book, Landvik weaves a narrative about life in a small town, including a news paper columnist, Haze Evans, dubbed by a community member as a“radical hag.” Haze slyly begins to include homespun recipes that her critics can use to “melt away any misdirected anger.”In this way, Chronicles can be read as a cookbook— a recipe for how food can be part of humor to help us recall our shared humanity.

If I had a nickel for every time someone asks me, “Why don’t you use your married name in your  column   byline?” I could probably cash them in and buy something nice for the kitchen — maybe not a refrigerator, but at least a toaster.

The other day a woman at the drug store nearly accosted me as I was innocently pricing callus pads (hint: break in your new shoes before wearing them in  the office all day) hissing at me that I dishonor my husband by ‘clinging to my maiden name.’

Not wanting to break out into a fistfight by the foot care display, I politely thanked her for her opinion while inwardly screaming, ‘It’s not my maiden name I’m clinging to, it’s myself!’

As proud as I am to be my husband’s wife, anytime I’m addressed as Mrs. Kirby, there’s a split second of confusion and I think, ‘Who’s that?’ Maybe it’s a newlywed’s reaction, although I think when Royal and I are celebrating our golden anniversary, the name’ll still seem a bit foreign.

I asked Royal, “What would you think if you had to take my name when we got married?”

Granting me one of his charming, loving smiles, he asked, “What do you mean?”

“I mean what if that were the custom — that the man takes the woman’s name instead of vice versa.”

“And how about, after you were married, you were referred to as ‘the former Royal Kirby.’ Wouldn’t you think, ‘hey, I’m still here!’”

We stared at each other for a moment and then he said, “Haze, are you writing a column about this?”

Now I’m not saying I have a vast readership, but still, my own name has been my byline since I published in my college newspaper, when I was hired at the ‘Fargo Forum,’ and now here. When I told Royal I planned on keeping it for professional reasons, he assured me it was fine with him. So to any married woman reading this column, ask your husband if he’d ever take your name. To any married man reading this column, how would you feel if your name was suddenly changed and to the world, you were no longer who you’d been?

This column garnered many responses, including a note signed ‘Mrs. Anonymous’ because ‘that’s how I felt when I had to take my big lug of a husband’s name and especially when I couldn’t seem to get rid of it even after the big lug and I divorced!’ A Mr. Joseph Snell wrote, ‘While having my morning coffee, I don’t mind I don’t mind reading the light piffle that is this columnist’s usual fare, but this morning’s looney harangue was nothing more than a chronicle of a radical hag!’

I could pen a long defense, but I won’t waste precious time — especially the precious time of men, who by an overwhelming majority were the ones most offended by my last column about taking or not taking one’s husband’s name. (Jeepers, you would have thought I’d asked for an amendment to the Constitution to rip away men’s names and their masculinity!)

Instead, I offer a recipe of my Aunt Alma’s Famous Almond Crescent Cookies with the suggestion thatthe baker in your household whip up a batch of these delectable morsels. I am certain I will then be forgiven for future hooey/baloney/radical haggishness that may appear in my columns. Really, they’re that good. (The cookies, not the hooey/baloney/radical haggishness.)

Alma was the type of cook who didn’t like to share her recipes, a parsimonious outlook, if you ask me. Why not spread a little goodness in each other’s kitchens? But Alma’s been gone for several years and her daughter happily made and distributed mimeographed copies of this recipe for all the relatives who had coveted it over the years. So to all of those who wrote particularly angry missives, I ask that put down your boxing gloves and put on your oven mitts instead.

2/3 cup almonds, pulverized (I like to seal them in a plastic bag and go after them with a kitchen hammer, but you can pulse them in a blender)

After thoroughly mixing all ingredients in bowl, shape dough into disc and wrap in plastic wrap. Refrigerate one hour. Pinch off a bit of dough, roll in palm into 3/4” ball, then into a log, carefully bending to shape into a crescent. Place on cookie sheet, an inch or so apart. Work fast or the dough will get too soft.

Meanwhile, mix together 1/2 cup sugar and 1/2 teaspoon cinnamon in pie plate. When cookies are cooled, place several of them in plate and shake mixture until cookies are covered in cinnamon sugar. Enjoy with coffee, tea, or milk and let their buttery, almondy goodness melt away any misdirected anger from which you suffer.

Lorna Landvik (she/her) is the author of twelve novels. She has performed stand-up and improvisational comedy around the country and is a public speaker, playwright, and actor most recently in the one-woman, all-improvised show “Party in the Rec Room.” She lives in Minneapolis. 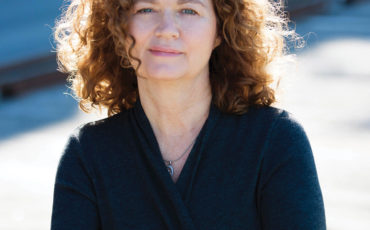 On a January day in 2001, my mother and I sat together in the Gale Family Library at the Minnesota 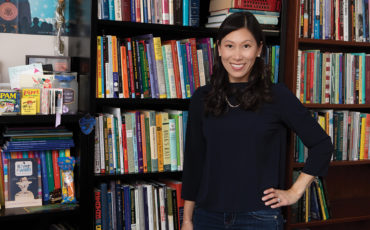 Of Mirrors and Windows

“If [children] see only reflections of themselves, they will grow up with an exaggerated sense of their own importance and value in the world. A dangerous ethnocentrism.” 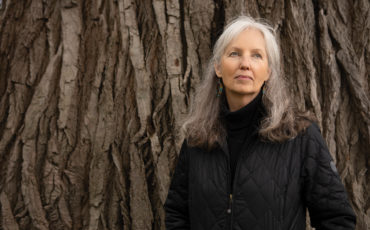 The Storytellers of Turtle Island

As a child, I read everything from Superman comics to “Little Women,” absorbing without question whatever these writers had to