My first memory of creating art was as a three-year-old. I took my mother’s food coloring collection — the type with the pointy hats — and, armed with a roll of toilet paper, made swirls of colors in the rain gutter, watching the colors merge and coil. Patiently wetting the toilet paper, I made pancakes on the sidewalk, drizzling the food coloring on the paper, watching the colors burst.

I am a child of immigrants. Both of my parents emigrated from Europe — my father from London, my mother from Guernsey, a tiny island off the coast of France. Growing up, my childhood was replete with stories of World War II and the ramifications it had on our history. My father survived the London bombings, with acute memories of hiding in the Underground with his mother and grandmother.

My mother had an even more traumatic beginning. Guernsey was occupied during the war. Most of the women and children were evacuated prior to the arrival of invading forces in June 1940. The island had its own language, Guernésiais, and a distinct culture, yet that language left with those children, as many never returned from the sanctuary countries. Those that remained were subject to harsh treatment. My grandmother was pregnant with twins— my mother and aunt. The community members were not allowed to go to the hospital. After the twins were delivered, my grandmother died.

Left with premature twin girls, my grandfather relied on the kindness and support of those already facing starvation. The community shared their meager rations. Both twins survived and grew to share the importance of compassion for all of humanity with their own children.

It was this sharing of histories, this intimate connection with world events, that permeates all of my work. Migration, empathy, hope, and human connections are all abundantly felt and portrayed in my art.

The Mississippi River Gorge and her wealth of heritage trees has always intrigued, inspired, and comforted me. My “Witnessing Waves” series pays respect to these gentle, magnificent, and steadfast witnesses of migration and settlement along our mighty river. The trees acknowledge the contribution of all of our backgrounds and ancestries.

The series started with a stump in the Mississippi River, in a gorge near 35th Street and West River Parkway. During my Augsburg undergraduate days, I would sketch “Stump” between classes. Sometimes I would roll up sketches and notes, wade into the river, and pop the paper into his crevices, hoping that one day I would find a note back.

Spring 2007 was slow in arriving. The steps down to the gorge were treacherous, but I braved the ice in order to see Stump again. Yet he was no longer on the sand flat. An ice floe had pushed him onto the beach, his flailing roots surrounding him like a halo. He looked like a discombobulated sunburst. I tried to push him back into the river, but to no avail. He seemed lost on the beach. I sat and cried.

It was my long friendship with Stump that started my thoughts about trees, and how the Mississippi has been the highway used to migrate to our region. The trees, quiet and majestic, have been silent witnesses to waves of migration.

They have seen hundreds of years of human travel up and down the river, welcoming everyone equally.

“Nurture” (30” x 48”) was painted after I found an old, broken tree while scrambling down steep hills lining the Mississippi River Gorge. She was stripped of most of her branches, except for a few poking through the canopy. Nestled in her exposed roots was a new tree. The sight brought tears from many emotions rolled into one. I thought of new immigrants bringing new ideas and families to this space, sacrificing the old known for a new unknown, nurturing their young in hopes of a brighter future.

The series is imbued with symbolism. DNA strands weave along the riverbanks and through the roots and ground, reminding us of our interconnectedness with all, reinforcing the idea that we are fundamentally tied to each other and the planet. The trees seem to talk to one another, sharing hopes and aspirations.

The branches at times reach, and at other times reject one another. The roots remain planted, with the tacit  understanding  that  firm  foundations,  and communication, are essential to survival. The individual squares — thousands of squares — are our opportunities. We can choose to interact or ignore the opportunities, remembering that there are always more adventures ahead. There are myriad options to explore. “Witnessing Waves” honors our collective histories, past, present, and future.

Alison Price (she/her) has a BA in Studio Arts from Augsburg College, and an MA from the University of Wisconsin. Her award- winning work is internationally and nationally collected, including a collection purchased by the FBI for their new headquarters. Details: AlisonPriceStudios.com, tpt.org/mn-original/profile/alison-price 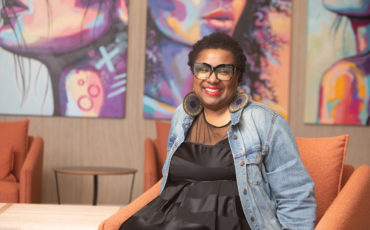 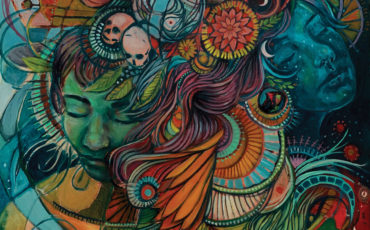 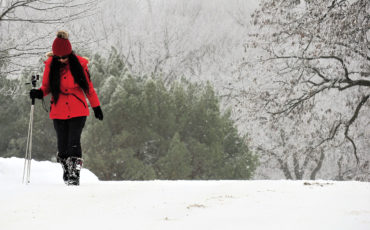 Our Home: Native Minnesota Multimedia pieces, rare artifacts, and historic and contemporary photographs tell first-person stories of the history of