by Michele St. Martin
418
The most important thing you can do is to make sure legislators and candidates will support sexual assault funding.

For three years, Camp Sheila Wellstone, a program of the Sheila Wellstone Institute, has been training domestic abuse and sexual assault advocates and survivors to effect change through political advocacy, civic participation and leadership development. In February 2007 the Institute held the first-ever training solely for Native women, “Camp Sheila in Indian Country.”

The Institute (an arm of Wellstone Action) brought together 60 Native women from all 11 Minnesota reservations and the metro area as part of Wellstone Action’s Native American Leadership project. The life-changing session culminated in a visit to the Minnesota State Capitol, where each woman lobbied her legislators, and 20 women testified about the need for domestic abuse funding in the Native American community.

It is a staggering need. “Six out of the 11 reservations have no [sexual assault] advocate,” said Institute Director Lonna Stevens, who is from the Tlingit and Dakota tribes. In order for a rapist to be prosecuted, evidence must be gathered in a specific way. The victim needs to know she must go to a hospital that can perform a special sexual assault exam (called a rape kit). In some cases, the closest hospital equipped to do this is 100 miles away.

“More than one out of three Native [American] women has been raped,” said Stevens, quoting a recent Amnesty International report. She goes on to quote the Department of Justice study that found 80 percent of the rapists are white or black men. This is especially significant, Stevens said, because if the rape occurs on a reservation, tribal governments can do little more than give rapists a slap on the wrist-tribal governments have very limited powers to punish nontribal offenders. “It’s an outrage,” Stevens said. Another important issue affecting the women is need for all Orders for Protection (OFP) to be entered in a statewide database.

Many of the women had never been to the Capitol. Stevens heard women say, over and over, that they had never thought they could have this kind of experience. The participants ranged from an 18-year-old woman who attended with her mother to elder women.

Though the funding bill did not pass this year, the women are not giving up. “I think that they felt like this was the first time they had been engaged that closely, and though this was a huge loss, they do not feel defeated,” Stevens said. “They are empowered to have an impact.”

And the momentum is going strong. Thirty of the women gathered in St. Paul on Dec. 19 for voter engagement training (currently, survivors are often afraid to vote because voter registration records are public documents that can be used by an abuser to locate his victim; the Institute is working to change that).

Others are considering running for public or tribal office (it is “almost an atrocity” that there is not one Native American member in the Minnesota Legislature, Stevens said) or are working on issues or electoral campaigns.

“They are phenomenal,” Stevens said. “This is just the beginning.”

Be a Changemaker
According to Lonna Stevens, the most important thing you can do is to make sure legislators and candidates will support sexual assault funding. For more information about the Sheila Wellstone Institute, go to www.wellstone.org/swinstitute. 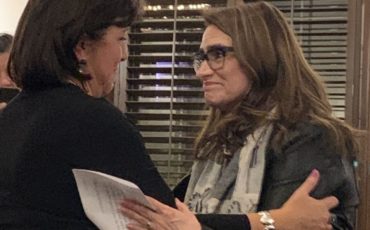